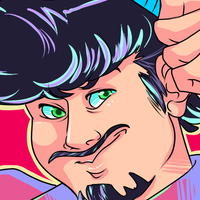 A gentle giant, Casey is every bit the loud and boisterous Chicagoan. His flamboyant personality has earned him a large circle of friends, and his kind nature keeps them around. He is intuitive and intelligent, though claims to have been "a bit of a bumblebutt" as a child.

Growing up, Casey favored the company of his sister Claire and his mother. His father, John Hanley, was physically and verbally abusive.

Casey opened his own practice with his law partner Angelo, where they take on quite a few notable clients.

In 1979, Casey and his son David were involved in a fatal car crash that killed the young boy and left Casey hospitalized for some time. Casey fell into a depression for several months afterward, eventually causing his then-wife Lila to divorce him. At some point in his grief, he rediscovers his love of Elvis Presley's music and becomes an Elvis impersonator, performing at small clubs. He meets Jeremy Stone at one of these clubs, and they forge a friendship.

Casey returns to work as an attorney to take on Eddie Lehrke as a client.