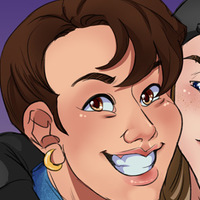 Personality
Taehyun is idealistic, optimistic, and sometimes naive. He tends to think the best of people, and is open to new experiences.

Despite his optimistic outlook, he has a dark curiosity about the morbid side of life; his interest in Syd is proof of that, as well as his occasional outings with Syd's friends to watch gory, near-snuff films and real-life found footage. He is afraid of his own dark nature, whereas Syd embraces it.

He has an older brother, Chanyeol, who wants to become part of a K-pop idol group a la H.O.T, Seo Taiji and the Boys, and Shinhwa.

Taehyun wants to become a doctor, but after Syd's ordeal, he begins to second-guess his ambitions...
History
Taehyun's mother worked as sanhujorisa, a care worker for women after childbirth. Every few years her work would take her to a new city or province—sanhujorisa were often in high demand, and caring for the wives of rich businessmen ensured a good, steady paycheck—and Taehyun would be left to start from scratch at a new school. His father eventually opened a small restaurant in Seoul, and his mother became a seamstress so the family could remain in one place.

When the South Korean economy took a downturn, his parents enrolled him in an exchange program, hoping he could earn the remainder of his high school education overseas in hopes of a college scholarship--as well as lessening their own financial burden. Taehyun learned English by watching American TV programs with his mother, and he is a proficient speaker, though he doesn't talk as fast as a native speaker would, instead taking time to choose his words carefully.

During his sophomore year, he was bullied by a group of older boys, and it was this incident that awakened Taehyun's dark nature. He pictured himself taking a crowbar out of his father’s garage and catching each of the perpetrators after school, giving each of them a few hearty wallops until they screamed for him to stop. And he would stop, because he wasn’t a murderer. He just wanted revenge. He never did it, of course, or anything remotely in the same psychotic wheelhouse. Just to know that he could was a thought comforting enough to carry him through the remainder of the school year. Whenever an over-confident bully intentionally shoulder-checked him in the hallway, Taehyun thought about slinging brain matter off the end of that crowbar. The idea that he was sparing his tormentors by choosing not to hurt them had a wicked attraction, made him feel like the very nature of his mercy was virtuous. He supposes the only thing that separates him from Syd is that Taehyun grew to fear those thoughts, to lock them away in a little mental box and throw away the key.
Likes & Dislikes
Likes: